The study guides provided and information below are designed to aid in preparing students for a educational and exciting performance. We encourage you to make use of these valuable resources designed to not only enhance each student’s theater-going experience; but to also complement their total educational experience. 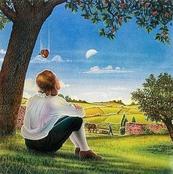 The world was a different place when Isaac Newton had that apple drop on his head. The English mathematician, astronomer, scientist, author and physicist developed the principles of modern physics, including the laws of motion.  Newton’s Apple is produced by Virginia REP on Tour and provides audiences with a glimpse in to the life of Sir Isaac Newton, who was the culminating figure of the Scientific Revolution of the 17th century.

Newton studied law at Trinity College Cambridge, part of Cambridge University. When Newton arrived in Cambridge in 1661, the movement we know now as the Scientific Revolution was advancing. During his schooling, Newton sought out the new philosophy and new mathematics and made them his own, quite brilliantly, and he recorded the progress of his work in his notebooks.  It was during those years that Newton laid the foundations of calculus and worked towards writing his essay, “Of Colours,” which contains most of the ideas elaborated upon in later years in his book, Opticks. It was during this time that he examined and applied analysis to the elements of circular motion — which later contributed crucially to the law of universal gravitation.

Sir Isaac Newton’s contributions to science and mathematics were many! When he died in 1726, he left behind a legacy of scientific contributions that secures him as one of the greatest scientific minds of all time.  Throughout the performance audiences will follow along with Newton as he uses scientific methods to conduct experiments and make discoveries that ultimately changed the world. 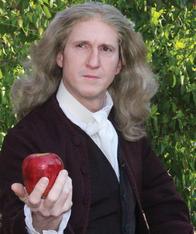